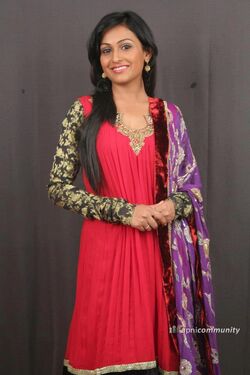 Archana Taide is an Indian actress (Born November 6, 1988). She started her career with the reality show Bollywood Ka Ticket on 9X TV. Later she did daily soaps like Kasturi and Swarg, Maan Rahe Tera Pitaah. She was last seen as Pavni in Imagine Tv's Beend Banoongaa Ghodi Chadhunga and currently she is playing the role of Nikkhat Ahmed Khan in Zee TV's Qubool Hai.

Archana Taide, who is currently seen in Zee TV's Qubool Hai and Ashish Sharma, who played Ranveer in Rab Se Sohna Isshq got engaged in a private ceremony. Ashish Sharma and Archana Taide have known each other for a long time. After a lot of thought, the two decided to get engaged amidst a gathering of family and friends in Mumbai. The function was attended by their friends and co-stars from the small screen.

Archana and Ashish tied the knot on January 30, 2013. While Ashish is a Brahmin, Archana belongs to a Christian family. Thus the couple got married in three different ways (one as per Hindu Brahmin tradition in Jaipur, then a Christian wedding which took place in Goa and then a court marriage). They met in Baroda. Ashish was shooting for Chandragupt Maurya, while Archana was shooting for Mahima Shani Dev Ki. Archana said that they completed one year of togetherness in January 2013.

Retrieved from "https://quboolhai.fandom.com/wiki/Archana_Taide?oldid=6354"
Community content is available under CC-BY-SA unless otherwise noted.