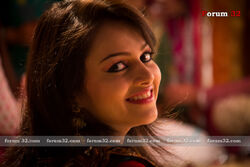 Neha started her acting career at a very early age of 6. After doing some daily soaps, she took break for her higher studies. She made her comeback with Na Aana Is Des Laado which was aired on colors channel. Currently, she is playing the role of Najma, the sister of Asad Ahmed Khan on Zee TV's Qubool Hai. She is a dance freak and she would love to participate in any dance reality show.

Retrieved from "https://quboolhai.fandom.com/wiki/Nehalaxmi_Iyer?oldid=6351"
Community content is available under CC-BY-SA unless otherwise noted.