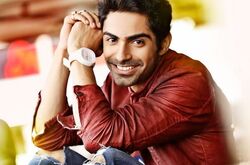 Paaras Madaan is a fresh face for Indian television. He is a theatre artist from Delhi and has done many commercial ads with MTV, Tata, Nestle Eclairs to name a few. He has acted in minor roles in Kis Desh Mein Hai Meraa Dil and Keshav Pandit. Now according to the sources he will essay the role of Anwar on Zee TV's popular Show Qubool Hai.

Retrieved from "https://quboolhai.fandom.com/wiki/Paaras_Madaan?oldid=6296"
Community content is available under CC-BY-SA unless otherwise noted.