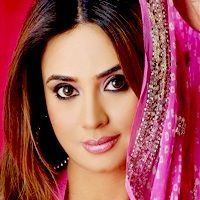 Shalini Kapoor married to Rohit Sagar, who is a theatre and television actor.Shalini and Rohit met at the gym they both go to and had a two and half year courtship. The wedding took place at Goregaon Sports Club according to Punjabi rituals in July 2008. The couple were blessed with a girl child Aadya in February 2011. Her cousin Reena Kapoor has acted in Sahara One TV serial Woh Rehne Waali Mehlon Ki. Originally from Kolkata, Shalini Kapoor has been in Mumbai since 2000. Shalini is a graduate in psychology.

Shalini Kapoor debuted as the sister of film director Parmeet Sethi in a Dubai based TV serial called Dastaan. Shalini Kapoor is presenting working in Serials Devon Ke Dev...Mahadev and Qubool Hai. Shalini has acted in a 1998 Hindi film with Akshaye Khanna called Kudrat. She did films with Mithun Chakraborty as well as a few Bhojpuri and Gujarati films.

Retrieved from "https://quboolhai.fandom.com/wiki/Shalini_Kapoor_Sagar?oldid=6348"
Community content is available under CC-BY-SA unless otherwise noted.