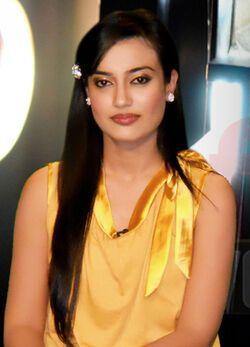 Surbhi Jyoti (born May 29, 1988) is an Indian television and theatre actress. She is popular for playing the Female Lead Role as Zoya Farooqui in Zee TV's soap opera Qubool Hai.

Jyoti was born to a Brahmin family in Jalandhar, Punjab. Her mother is a homemaker and her father is a businessman. She received her early education from Shiv Jyoti Public School and then graduated from Hansraj Morarji Public College. Jyoti also obtained a MA degree in English from Apeejay College of Fine Arts. She now lives in Mumbai, Maharastra while her parents and younger brother reside in Punjab, and has stated that her family has been very supportive of her acting career.

Before appearing in films and TV shows, Jyoti had some experience doing theatre. Her first role was in the Punjabi show, Akiyaan To Door Jayen Na. She then appeared in the film Ik Kudi Punjab Di, and portrayed the character Preet in the show Kach Diyan Wanga. After doing the role of Priyanka in Munde Patiale De, Jyoti landed her first lead role as Reet in the 2012 movie Raula Pai Gaya.

Jyoti currently essays the role of Zoya Farooqui in Zee TV's Qubool Hai opposite Karan Singh Grover, and has gained significant media attention and popularity. On her role as Zoya, she has said that she can relate to her character in real life.

Retrieved from "https://quboolhai.fandom.com/wiki/Surbhi_Jyoti?oldid=7381"
Community content is available under CC-BY-SA unless otherwise noted.