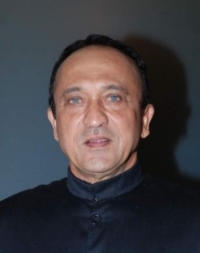 Tej Sapru is an Indian tv and film actor and is a Son of D.K. Sapru, brother of Hindi and Punjabi actress, Priti Sapru who is a famous bollywood actor. He had acted in many hindi films and tv serials. He is most popularly known for Zee TV's Qubool Hai.

Retrieved from "https://quboolhai.fandom.com/wiki/Tej_Sapru?oldid=5809"
Community content is available under CC-BY-SA unless otherwise noted.