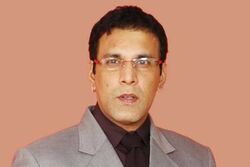 Vaquar Shaikh is an indian television actor. Vaquar Shaikh last in Solhah Singaarr is making his comeback on television after nearly two and half years with Woh Rehne Waali Mehlon Ki. His entry will mark a beginning of yet another love saga . He was last seen in Kaali - Ek Agnipariksha and he is currently playing the role of Rashid Ahmed Khan in Qubool Hai.

The charming personality with a good voice and standing 6 feet tall, Vaquar is a well known face and is known for his talented performances in many Tv serials where he has played either the title role or the stories have revolved around his character. Vaquar Shaikh had done many tv serials and some bollywood movies and he is currently seen in Qubool Hai.

Retrieved from "https://quboolhai.fandom.com/wiki/Vaquar_Shaikh?oldid=6353"
Community content is available under CC-BY-SA unless otherwise noted.