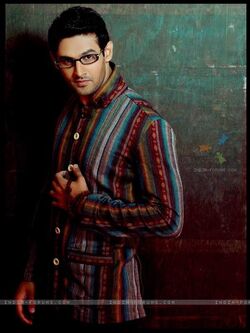 Vishal Nayak is a Model turned Actor, who is known for his brilliant stints in Sapno Se Bhare Naina on Star Plus. He was also seen in the Sony Entertainment Television show, "Bayttaab Dil Kee Tamanna Hain". He proved his talent by playing a different charecter in the show. Currently Vishal is essaying the role of Farhan Qureishi on Zee TV's Qubool Hai.

Vishal Nayak and Preet Kaur met on the sets of Zee TV's Preet Se Bandhi Ye Dori Ram Milaayi Jodi wherein they played an onscreen couple. The duo fell in love and decided to get married. The couple was blessed with a kid which was born on December 20, 2013.

Retrieved from "https://quboolhai.fandom.com/wiki/Vishal_Nayak?oldid=6346"
Community content is available under CC-BY-SA unless otherwise noted.